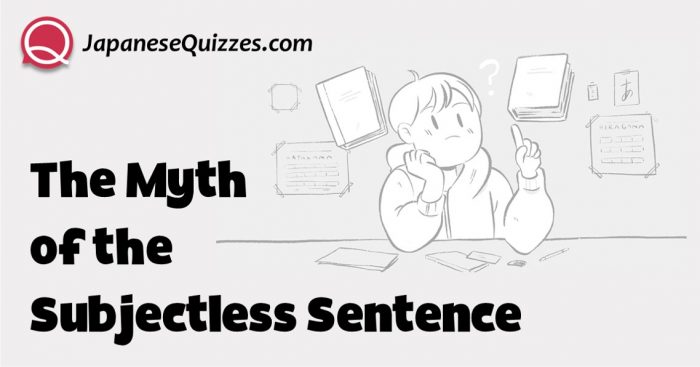 The very first time they present an apparently subjectless sentence, all Japanese language textbooks should have large warnings printed in red:

You Are Now Entering the Twilight Zone

It is here, more than anywhere else, that the language suddenly begins to melt into that amorphous mass of ceremonial tea and incense and Zen and haiku, where distinctions between self and other, I and Thou, subject and object, disappear in a blinding flash of satori. Now the student sees that the phenomenal world is but an illusion, it is all within you and without you. Absorbed into the great Oneness (or Nothingness; take your pick), we enter into the true Japanese state of mind, and we experience firsthand what makes the language vague. 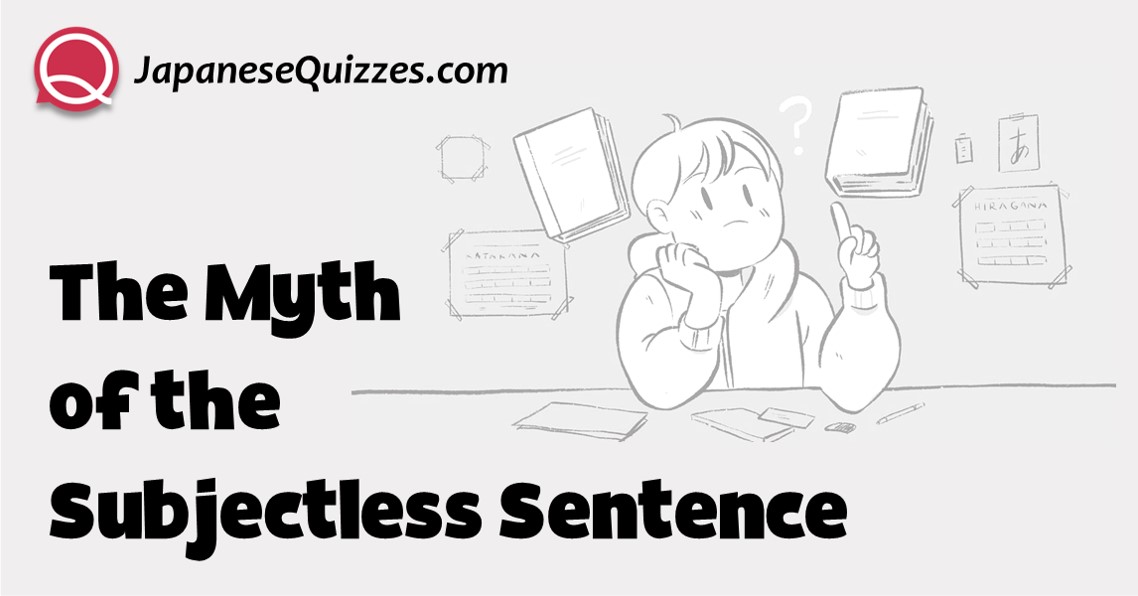 Meanwhile, the Japanese themselves go about their business, commuting and shopping and cooking and raising their kids’ math scores to some of the highest in the world and making super color TVs and cars, using unnamed subjects—and objects and everything else—all over the place, utterly unaware that their language makes it impossible for them to communicate precisely.

Enamored of their vaunted “uniqueness,” the Japanese have been as eager as anybody to promote the illusion that their language is vague and mysterious. Not all of them buy into the myth, of course. Take the linguist Okutsu Keiichiro, for example. “Japanese is often said to be vague,” he notes, “partly because subjects and other nouns are often deleted, but if the speaker and listener are both aware of the verbal or nonverbal context in which the utterance takes place, all that is really happening is that they don’t have to go on endlessly about matters they both understand perfectly well. In fact, Japanese is an extremely rational, economical language of the context-dependent type.”

The greatest single obstacle to a precise understanding of the Japanese language is the mistaken notion that many Japanese sentences don’t have subjects.

Wait a minute, let me take that back. Lots of Japanese sentences don’t have subjects. At least not subjects that are mentioned overtly within the sentence. The problem starts when students take that to mean that Japanese sentences don’t refer in any way to people or things that perform the action or the state denoted by their predicates. The same goes for objects. They disappear just as easily as subjects do.

What Japanese doesn’t have is pronouns—real, actual pronouns like “he,” “she,” and “it” that we use in English to substitute for nouns when those nouns are too well known to bear repeating. And that’s all that we use pronouns for: because we don’t want to hear the same things over and over, whether subjects or objects or whatever. Can you imagine what English would be like without pro-nouns? Look:

Cloquet and Brisseau had met years before, under dramatic circumstances. Brisseau had gotten drunk at the Deux Magots one night and staggered toward the river. Thinking Brisseau was already home in Brisseau’s apartment, Brisseau removed Brisseau’s clothes, but instead of getting into bed Brisseau got into the Seine. When Brisseau tried to pull the blankets over Brisseau’s self and got a handful of water, Brisseau began screaming.

No one could stand that for long. Now let’s try it with pronouns, as in the original:

Cloquet and Brisseau had met years before, under dramatic circumstances. Brisseau had gotten drunk at the Deux Magots one night and staggered toward the river. Thinking he was already home in his apartment, he removed his clothes, but instead of getting into bed he got into the Seine. When he tried to pull the blankets over himself and got a handful of water, he began screaming.

What a relief! But Japanese is even less tolerant of repeated nouns than English. Let’s see the passage looking more like Japanese, without all those repetitious pronouns:

Cloquet and Brisseau had met years before, under dramatic circumstances. Brisseau had gotten drunk at the Deux Magots one night and staggered toward the river. Thinking already home in apartment, removed clothes, but instead of getting into bed got into the Seine. When tried to pull the blankets over self and got a handful of water, began screaming.

Of course this sounds “funny” because of what we’re used to in normal English, but the meaning is perfectly clear. Once it is established that Brisseau is our subject, we don’t have to keep reminding the reader. This is how Japanese works. (And, in certain very explicit situations, so does English: “Do not bend, fold, or spindle,” “Pull in case of emergency,” etc.)

There is only one true pronoun in Japanese, and that is nothing at all. I like to call this the zero pronoun. The normal, unstressed way of saying “I went” in Japanese is not Watashi wa ikimashita but simply Ikimashita. (In fact, strictly speaking, Watashi wa ikimashita would be an inaccurate translation for “I went.” It would be okay for “I don’t know about those other guys, but I, at least, went.” See “Wa and Go: The Answers to Unasked Questions.”)

Instead of using pronouns, then, Japanese simply stops naming the known person or thing. This doesn’t make the language any more vague or mysterious, but it does require that we know who is doing things in the sentence at every step of the way. This is not as difficult as it may sound. After all, take this perfectly unexceptional English sentence: “He mailed the check.”

To a beginning student of English, this sentence could be very mysterious indeed. Speakers of English must seem to have a sixth sense which enables them to intuit the hidden meaning of “he.” How do we native users know who “he” is? Well, of course, we don’t—unless he has been identified earlier. Again, the same goes for objects. “He mailed the check” could be “He mailed it” (or even “Mailed it”) in the right context, and nobody would bat an eyelash. I recently caught myself saying, “He’s his father,” and the person I said it to was not the least bit confused.

On the matter of unexpressed subjects, Eleanor Jarden’s excellent Japanese: The Spoken Language notes that “A verbal can occur as a complete sentence by itself: there is no grammatical requirement to express a subject.” Lesson 2 contains a strongly worded warning to avoid the overuse of words of personal reference, noting how often Japanese exchanges avoid “overt designation of ‘you’ or ‘I.'” The explanation offered for this is socio-linguistic:

This avoidance of designation of person except in those situations where it has special focus is a reflection of the Japanese de-emphasis of the individual, and the emphasis on the occurrence itself rather than the individuals involved (unless there is a special focus).”

I would be the last to argue that Japan’s is a society of high individualism, but I do think it takes more than a glance at the society to explain why not only human beings but pencils and newspapers and sea bream can and do disappear from linguistic utterances when reference to them would be considered redundant. In the beginning stages of language learning, especially, example sentences are often thrown at students outside of any context, which can cause more bewilderment than enlightenment when dealing with grammatical points that make sense only in a context.

Imagine a Monty Python character walking up to a stranger on the street and suddenly blurting out, “He mailed the check.” He’d probably get a good laugh—and just because of the lack of context. If you have learned such words as watashi, boku, anata, kimi, kare, kanojo, etc., you probably think I’m forgetting that Japanese does have pronouns, but those are only adapted nouns originally meaning “servant” or “over there” or the like, and they are not used simply to avoid repetition as English pronouns are. If you tried putting kare or kare no in for every “he” and “his” in the Brisseau passage, you would end up with Japanese just as stilted and unnatural as our first version above. (One way that certain Japanese authors—Akutagawa Ryumosuke comes to mind—give their prose an exotic “foreign” tone is to use more “pronouns” than are strictly necessary.) It’s true that, when these pseudo-pronouns are used, they are standing in for other nouns, but Japanese uses these things only as a last-ditch stopgap method of keeping the discussion clear when the zero pronoun threatens to evaporate. As long as the writer or speaker is confident the referent is clear, the only pronoun is zero.

I said above that Japanese unnamed subjects require that we know who is doing things in the sentence at every step of the way, and without a doubt the most important single step is the verb that the subject is doing (or being). Subjects may drop away, but verbs rarely do. In fact, subjects are subjects only when they do something or are something: otherwise, they’re just nouns hanging in space. “Ralph” is not a subject until we give him something to do or be: “Ralph croaked.” What did Ralph do? “He croaked”—or, in Japanese, “Croaked” (Nakimashita). “Ralph is a frog.” What is Ralph? “He is a frog”—or, in Japanese, “Is a frog” (Kaeru desu).

I repeat: All Japanese sentences have subjects. Otherwise, they wouldn’t be sentences. True, as Jorden says, “there is no grammatical requirement to express a subject,” but just because we don’t overtly refer to it doesn’t mean the subject isn’t there. Subjects and verbs do not exist in separate universes that float by chance into positions of greater or lesser proximity. They are securely bound to one another, and unless we insist upon that, our grasp of the Japanese sentence becomes more tenuous with each more complicating verbal inflection.

The need to keep track of subjects becomes absolutely crucial when the material you are dealing with contains verbs in some of the more complex transmutations that Japanese verbs can undergo: passive, causative, passive-causative, and -te forms followed by such delicious di-rectional auxiliaries as kureru, ageru, yaru, morau, and itadaku.

It’s one thing to say that the need to keep track of sub-jects is crucial, but quite another to say how to do it. One extremely effective method can be found in the now dis-credited language-learning technique of translation—extremely precise translation in which you never translate an active Japanese verb into a passive English one, in which you carefully account for every implied “actor” in a Japanese verbal sandwich, in which you consciously count the number of people involved in an expression such as Sugu kakari o yonde kite yarasero. The next two chapters go into more detail on the relationship between the subject and the rest of the sentence.

Making Sense of Japanese What the Textbooks Don’t Tell You